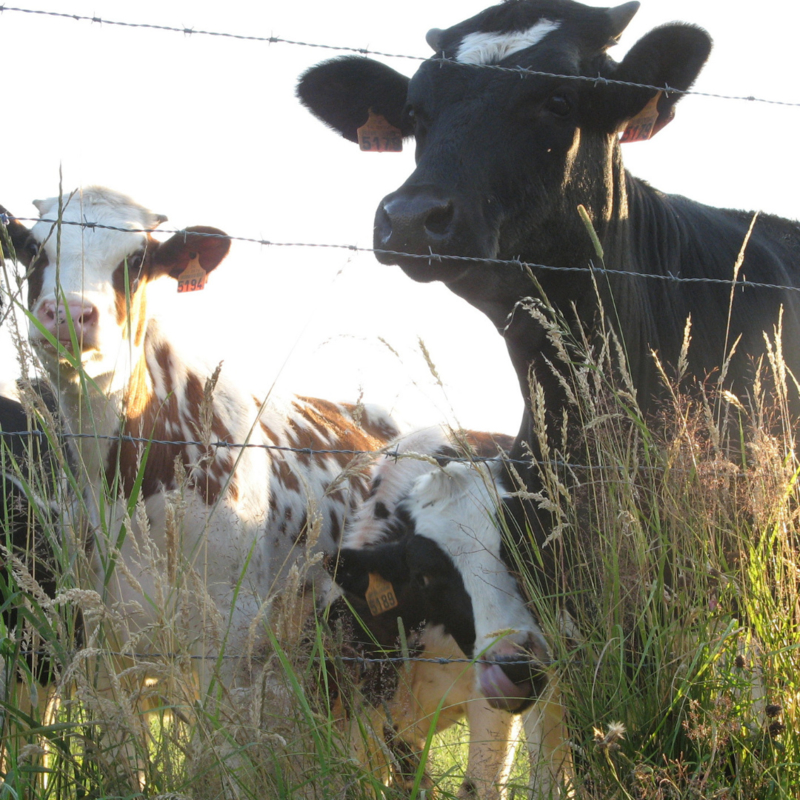 Carmine is an intense red color that is derived from the blood of cochenille lice. The color is used in paints as well as cosmetics and as a pink food colorant (additive E210). Cochenille lice live on on a cactus species called prickly pear and most plantations are situated in Latin America. There a box of impregnated cochenille insects is placed onder each cactus and left to feed on the cactus, grow and multiply. When they have reached their maximum size they are harvested with air compressors. The plants are then left to recuperate for a couple of months before they are infested again.

Bone black has been used for centuries and is also still being used in paints. Bone black is a carbon pigment that is made by charring animal bones. The bones, usually from cows, are heated up to 700 degrees Celsius (1292 Fahrenheit) with a low oxygen concentration. Bone black is also sometimes calles ivory black, because formerly this pigment was made from ivory. Nowadays the use of ivory is prohibited. Bone black can also be found in colors that consist of a mix of pigments, such as paynes gray.

Sepia is a pigment with a dark brown color that is taken from the cuttlefish ink bag. Sepia is the Greek word for cuttlefish, a kind of squid. The pigment was invented by professor Jacob Seydelmann from Dresden, who developed a process at the end of the 18th century that allowed him to turn the ink into a usable pigment.

Eggshell white is not widely used, but is available here and there. It is made from ground eggshells.

Rarer but also stil available is tyrian purple, also known as tyrian red or imperial purple. This deep purple color is secreted by the gland of Murex snails. For one gram of pigment, thousands of snail are needed, which makes this pigment extremely expensive (over 2500 euro per gram). For that reason it is not used commercially. Tyrian purple was first used by the Romans arouns 1570 BC. Because of it's expense, it was a status symbol. The color was used to dye clothes that were only allowed to be worn by men with power.

I was shocked to learn that between 1600 and 1800 even human remains were used as pigments. The color 'mummy brown' was made of actual mummies... gross!

Ox gall, a substance that is secreted by mucus glands in the livers of cows, is used by some companies and is usually listed in paint recipes as an emulsifier. Since the purpose of an emulisifer is to enhance the mixing of oil based and water based ingredients and there the oil based ingredient in watercolor are negligible, I don't see the point in using it. I never have, and I've never had any problems with paint splitting. Another attribute of ox gall is that is that it reduces the surface tension of water, which enhances flow, meaning that the paint will spread over the paper more easily. Also it will flocculate less. (Flocculation is when pigment particles group together in little 'flocks'.) Commercial paint manufacturers aim to have all pigments/colors behave as uniform as possible, so they add more ox gall to pigments that have a higher tendency to flocculation. I however find the fact that all pigments behave differently and have their own set of characteristics one of the beautiful aspects of watercolor and I wouldn't want to mask that.  Finally, ox gall makes paint dry slower on the paper, which can be helpfull when you paint wet in wet. If you would like to make use of any of the properties of ox gall and you don't want to use the animal one, a synthetic version is available. You can simple ad one or two drops of it to your paint water.

Glycerin is a substance that is usually won out of aminal oil. It is added to watercolor to make it easier to rewet and it makes the paint less prone to cracking. The glycerin I use in Kaia Natural Watercolor is vegetable glycerin. When glycerin is listed as ingrediënt it isn't automatically clear whether this is animal or vegetable glycerin.

Honey is usually listed in watercolor recipes and also used by some companies, like Sennelier. Honey was originally added to keep the paint from drying out and to make it mouldable. This was before the use of glycerin in watercolor was invented. In my opinion using glycerin makes the use of honey redundant. When I started developing paint recipes I have tried making paint with and without honey and I actually liked the result better without honey in it, as did my test team of artists. You can read more about this subject in my blog about the history of making watercolor.

In egg tempera paint egg yolks are used as a binder. Egg tempera is traditionally used for painting icons.

In casein paint, also called milk paint, casein, a milk component, is used as a binder.

The binder that is typically used in indian ink is shellac, a material that is secreted by certain tree lice that live in India and surrounding countries. The secretion product of the lice is scraped off the trees they live in, dried, and then dissolved in an alcohol solution that is often toxic. Shellac is also used in the food industry as additive E904, because it can make products, like candy, shiny. The indian inks produced by Winsor & Newton, Royal Talens, Creall and Sennelier are all shellac based. Pelikan Fount India Ink is the only one I've been able to find that doesn't contain shellac.

Animal fats and beeswax are used in various types of chalk and pencils.

A lot of watercolor papers on the market aren't vegan (or even vegetarian), because gelatin is used in a part of the production process that's called sizing. Gelatin is made of collagen, a protein that is derived from the skin and bones of animals, usually cows. Sizing is a process that makes the paper fibers less absorbent, aimed to not have the paint soaked op by the paper immediately. Vegan papers are sized with vegetable sizing or not sized at all. Since sizing is seen as an aid in the production process as opposed to an ingredient of the paper, it is usually not listed as a ingredient. You can find an overview of what papers are or aren't vegan in my FAQ section.

Gesso is a white paste that can be applied to a canvas, wood panel or other surface, as a primer coat for watercolor or other paints. It is made of a mix of chalk, white pigment and an animal glue binder, usually rabbit skin glue.

Brushes that are made of animal hair are usually labaled 'sable' or 'camel' for example, but that doesn't always mean that that is the animal the hair came from. Sable hair for example can come from minks, ferrets or weasels, and some of these animals are considered endangered. Hair that is plucked from the ears of an ox can also be labeled 'sable'. Most animal hair that is used in brushes is a (by)product of either fur farming (mink, sable), hunting and trapping(squirrels, weasels) or meat production (horses, goats). A lot of people think that animals are shaved for their hair, but that isn't usually the case. A lot of these are wild animals, which would make shaving impossible. They are killed by gassing or electrocution, in order to not damage the fur.

It is next to impossible to nail down where manufacturers get their hair and how the animals it came from were treated. The hair often comes from countries where animal welfare regulations are nonexisent or monitored very poorly.

The bristles of synthetic brushes are made of plastic, which isn't great either of course, but if I have to choose between animal hair and plastic hair I still choose the latter. I recommend the use of synthetic brushes from Raphael Soft Aqua. The hairs of those brushes have tiny indentations, to mimick animal hair, so that they can retain more water. They are of good quality and still affordable.

I think it’s important that as a consumer you can make informed disicions and I hope this mail helps enables you to do that. Do you not want to miss any of my new blogs? If you subscribe to my newsletter and I will keep you in the know!

If you want to know if certain artists' supplies contain animal derived ingredients, the manufacturer should always be able to answer your questions about this. You can also find overviews on www.veganartstuff.info and www.doublecheckvegan.com. Kaia Natural Watercolor is also included in the lists on both websites.