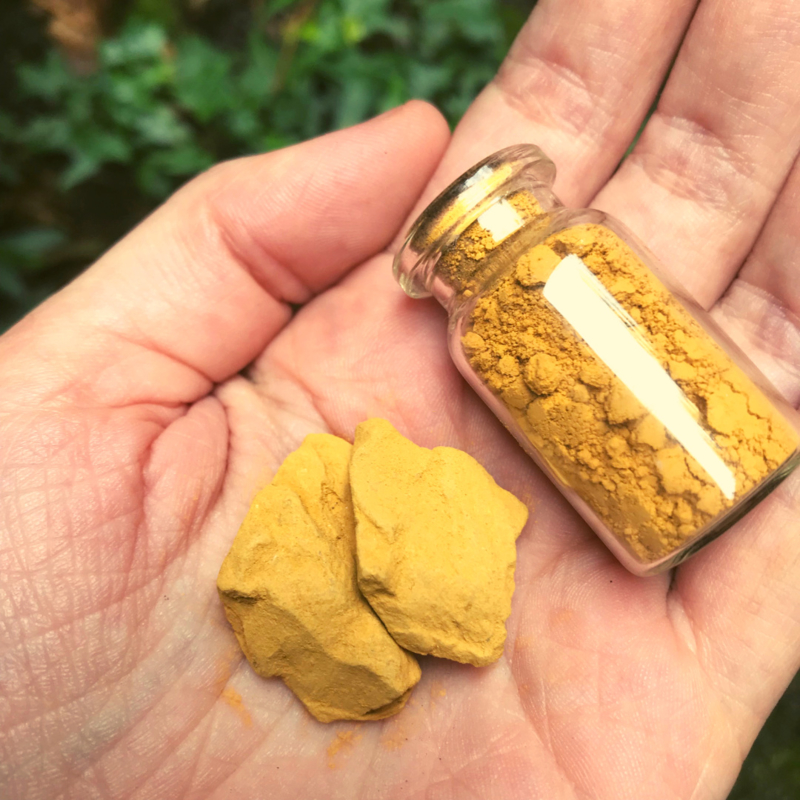 There's so much to tell about earth pigments! I've listed 10 interesting facts for you:

Icons (religious images painted on panel, usually with egg tempera) are traditionally painted with earth pigments. The reason for this is that God is seen as the creator of the earth and since these pigments are literally earth, God must be present in these pigments. Also, in some ochre mines in Australia, it is an age-old use for the miners to ask permission from the gods who live underground to be allowed to enter the mines.

If you look at paintings from the Middle ages, it will often stand out to you that the skin of the painted characters looks a bit sickly. The reason for that is that green earth pigments, often mined in Italy, were commonly used as an underpainting, covered by a red/pink pigment. The green that shone through the pink a little bit, gave a natural skin tone. The pigments that were used in the upper layer however, were often not lightfast and they faded over time, leaving much more of the green layer visible that when the painting was painted.

The red earth that the surface of planet Mars is covered in is the same material as the red ochre I use to make rust red watercolor. It is oxidised iron that gives it the red color. If only I could get my hands on some of that Martian earth... I could make extraterrestrial paint!

The internal use of ochre, ingested or used in tattoos, may well have played a part in human evolution. According to Carlos Duarte, a Spanish paleontologist, this pigment might have functioned as a prehistoric iron supplement, dat aided the brain's development.

Italian scientists have discoved that red earth pigments in fresco's (mural paintings on plaster) can be used for very accurate dating of the painting at hand. Red ochre contains iron and iron molecules behave like compass needles. De iron molecules in the paint point to the magnetic north and while the paint dries the molecules are anchored in this position. The magnetic north shifts a little bit every year (within a reach of 18 degrees), so you can determine in what year the paint is applied if you know where the magnetic north was in the years gone by.

In North-East Arnhemland, Australia, red ochre is being used by Aboriginal people in initiation ceremonies in which boys become men. Red ochre is smeared on their chest in sacred clan patterns. Some anthropologists say that the red color of the ochre is a symbol of a man's blood, but there's also a theory that states that the ochre works as a magnet for ancestors, so they can show them the way along sacred paths of the spirit.

9 The first use of ochre

Ochre is commonly found on archaeological sites around the world. The oldest use of ochre discovered so far is from a Homo Eructus site in Kenya that is about 285,000 years old. More than 70 pieces of ochre were found there, weighing a total of 5 kilograms (11 pounds).

Red ochre is being used as a form of sun protection by some tribes in Africa, like the Himba people in Namibia. Ochre pieces are ground to a powder and mixed with butter and than applied to the skin. It has been scientifically proven that ochre inhibits the effects of ultra-violet radiation.

So that makes 10! Do you not want to miss my new blogs? If you subscribe to my newsletter I will keep you in the know!